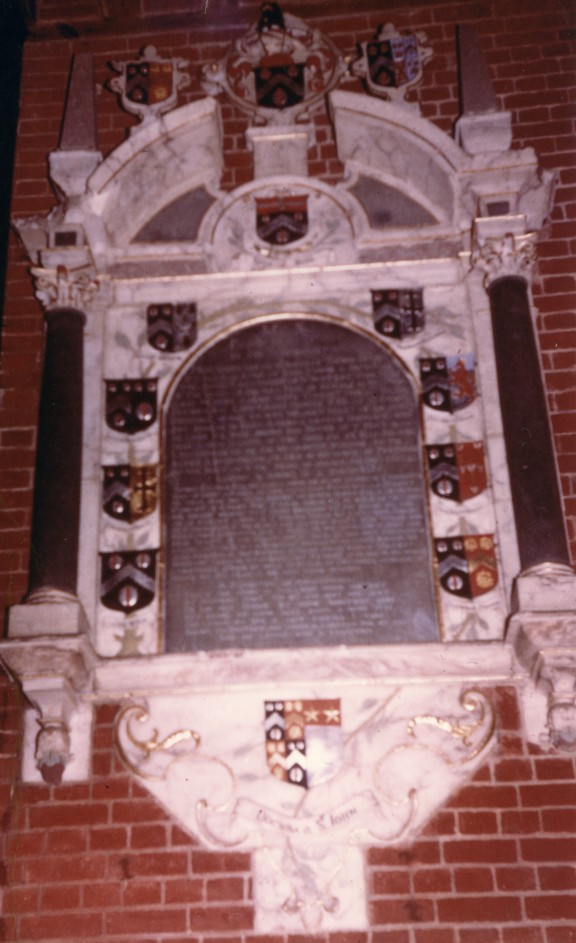 Here under lieth the Body of Thomas Docwra the elder, Esq, Lord of this Town, and Patron of this Church, descended of the Ancient Family of Docwra Hall in Kendal in the County of Westmorland, Nephew and Heir unto the Right Honourable Sir Thomas Docwra, Lord Grand Prior of the Knights of St. John of Jerusalem. He had to wife Mildred Hales of an antient family in Kent - a grave and vertuous Matron with whom he lived 52 years, having been Justice of the Peace forty years, and High Sheriff of the Shire, Anno 23 Eliz. Beloved and reverenced of all for his Gravity, Wisdom, Piety, Justice and Hospitality. He died in his House at Putteridge, by him built, in the 84th year of his age, Anno Dom. 1602. Leaving 4 sons and 2 daughters.

Thomas Docwra Esq., his eldest son did by his studies in ye Universitie, Innes of Court & France attaine unto good knowledge and experience. His first wife was Helen daughter of George Horsey Esq., and his wife ye daughter of ye Right Honble Sir Ralph Sadleir, Knt., by whom he left one only daughter married to Sir Henry Pakenham Knt. His second wife was Jane one of ye daughs and heirs of Sir William Periam Knt. Lord Chief Baron of the Exchequer, with whom he lived 22 yeares and left issue Periam and Henry, Anne, Elizabeth, Jane and Mary.

He was Justice of ye Peace and High Sheriffe of this County Anno 3rd Jacob. He was not ambitious of honours or Titles, but contenting himself with his estate, whereof he lived plentifullie, was worthily esteemed for his wisdome, judgement, moderation & liberal housekeeping.

In ye 72nd year of his age he did meekly and christianly render his soule unto God at Puttridge aforesaid 6th Martii 1620 Ano.Dni. & was hereunto interred.

A Prevention of Forgetfulness